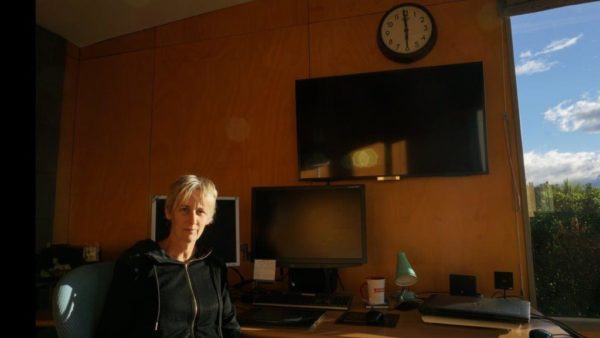 Tucked away in Wanaka, New Zealand, Kim talks video clips, coding and about escaping into the mountains of her remote office.

Can you tell us a little bit about yourself? How did you get involved in the VFX industry?

I was in the industry at its absolute infancy. I was hired as a school leaver at Television New Zealand. I started during a time computers were just being introduced - it was a dream beginning for a young and keen teenager. Working in their graphics department, I drew everything by hand and placed it in front of a rostrum camera. I was then discovered by the start-up company who bought the first 3d animation computer into New Zealand. I learnt everything on the job, and every project was the first of its kind in New Zealand. I’m pretty sure I would have made New Zealand's first flying logo. Most New Zealanders eventually travel, and I followed this path with skills in my pocket.

I struggled to get CG work in the UK as I was so young. I don't think anyone believed I had the experience. I ended up in front of a Quantel paintbox which lead me to build up skills in 2D departments. As Quantel developed its tools to Harry then Henry I just kept up with it. Eventually I began with Flame and stayed with them for 15 years, working in post-production houses across New Zealand and Australia. I've now found my niche as a compositor. I really enjoy being the last hand on a shot and seeing it through to its final state.

What films/television shows/animations really got you interested in the industry? What were your creative inspirations?

Without a doubt, the first three Star Wars movies had me hooked. After that it was the lure of video clips to the world. I felt they utilized CGI and experimental work more than film back in those days. The Dire Straits clip Money for Nothing had me very excited, I think it was the first fully CG video created and it was created on a Bosch, which was the competitor machine to the one I was running (Symbolics). I enjoyed the challenges of working out how to make computers work, the need for creative vision using such a mathematical tool was a very foreign mix back then. As you can imagine the machines weren't known for being user-friendly. There was a lot of coding required, which I struggled to grasp. Thankfully computer techs were a part of the mix!

I reached the top of my game working as a Flame artist in the TVC industry. Looking back, anything we did was groundbreakingly big, but I take pride in building my skill set to the point I could work anywhere in the world. I traveled the globe a lot throughout my career. One of my biggest challenges, and something I see as a highlight in my career, was when I worked in Beijing for three weeks.  I was brought in specifically to give the project a western look. I worked with a Chinese CG department where no one spoke a word of English. I walked 30 minutes to the office each day to attempt to absorb some of my surroundings. I didn't see one westerner for the three weeks. We occasionally had a translator come in but communicated mainly with scribbles on paper. It was a surreal way to work - the only thing to speak my language was Flame.

What drew you towards working with the Legion VFX team?

I have been passionately chasing my dream to work remotely for years. Everything about Legion’s setup, ethics and goals is in line with my thinking.

Where are you based in the world? What do you like most about the location in which you live/work?

I am based in Wanaka, New Zealand. The location is very scenic with mountains and lakes. Many Lord of Rings scenes were shot in the area. I was drawn here for its beauty, but it has also led me to shoot more supervision work, which has been great to gain experience in.

Which projects have you been most proud to work on at VFX Legion, and why? What projects have been particularly challenging or exciting?

Stephanie was great fun. We were able to set up a really collaborative workflow between three of us kiwis, all living in different corners of the country. We had a decent scene to build using projections which Jean-Luc Azzis lead, we needed to share setups continuously to keep everything consistent. It was perfect example of remote workflow working between multiple artists.

What are the challenges facing compositors today, and how do you overcome them?

Long hours in dark rooms. It’s not a healthy lifestyle. Working remotely allows flexibility in working hours. Time isn’t wasted commuting and we don’t sit around waiting for elements and renders. Our team are able to avoid in-house politics and chitchat. I simply love getting on with my job and doing what I’m good at. I feel remote living and working has improved my mindset, ability to focus and creativity.

Why do you think remote working is so important for today’s VFX industry, and how does overseeing such a remote workforce empower your day-to-day activities?

A large in-house factory setup can numb the creative force. I think worldwide collaboration is very much possible thanks to today’s online tools. Legion is proving that.

I love being outside. From climbing mountains and sliding down them on planks to biking, walking, rivers, lakes and growing food. I also love all animals, particularly birds.