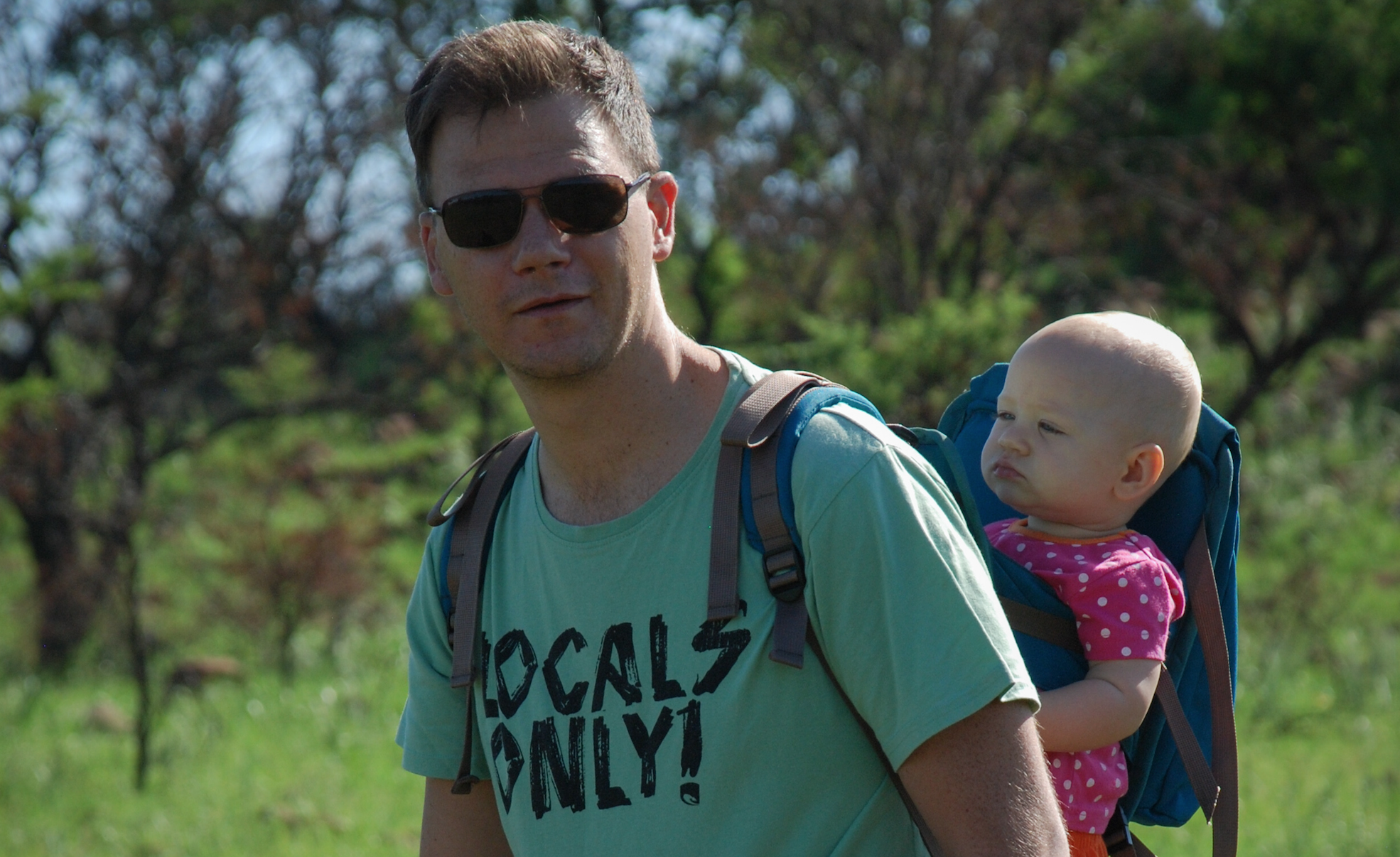 South African compositing wildman Eugen Olsen takes us from rural kwaZulu Natal to the future of all work. Let's hear it, Eugen!

My name is basically “John Smith” in Norwegian, but I was born in rural kwaZulu Natal, spoke Zulu before English, was reprimanded in German and ended up marrying an Afrikaans girl. Which makes me a typical South African; a fruit-salad of culture and languages! We have two girls (4 and 2) who cannot abide the indoors - if there’s an animal to rescue, a place to explore, or a parental boundary to push, they’ll find it. Life has become a whole new adventure with them! Otherwise, I now live between Pretoria and Johannesburg in northern South Africa, and although we may sound technologically archaic (we call traffic lights “robots”. Really.) we actually have quite a competitive post-production industry. My start came by making short promotional and educational videos for a medical NGO (read: zero-budget productions) straight out of high school, which turned out to be my film school of hard knocks. I scoured the net for tutorials, read the software manuals (!) and made numerous blunders and discoveries in the wonderful world of video production. While I loved chasing doctors with a camera through refugee camps in Angola, I found my place in post-production. First in editing, then finally (15 years later), in compositing and finishing. Although I’ve done some 3D animation, I feel most comfortable pushing pixels in Nuke or After Effects.

What films and television really got you interested in the industry?

I grew up in a fairly conservative environment - so TV and movies were a rare treat. I distinctly remember a family holiday when I was about 13 when movies captured my imagination. My dad had a deliciously dark sense of humor, so the first night at our family cottage at the beach, he hired Jaws to “prepare us”. I’m not sure I got my toes wet that week - but my imagination had been captured. I had no idea a medium could so powerfully affect me. On the last night, we watched Jurassic Park - and I was blown away. There was a way to make the impossible happen. You could immerse other people into your own mind. To my surprise, this was no easy process. Over the past couple years, I’ve managed the visual effects team for a number of projects - including the mini-series Madiba and a biopic called the Journey is the Destination, which involved a lot of set extension, crowd replication and cleanup. But perhaps a highlight was being part of the on-set VFX team for Avengers: Age of Ultron when they blew up a couple blocks of Johannesburg a couple years ago. That was great fun!

What's good about the location in which you live/work?

South Africa is an amazing and unique place – a fantastic mix of cultures, beautiful landscapes with wonderful variety. That makes it a very attractive destination for the film industry. The last decade has seen a lot of productions come here, which is what gave me opportunities to move from advertising to features and longform TV. But during that time, improved internet speeds and various technologies have started to allow anyone in post-production to work from almost anywhere in the world - so it’s made it possible for me to settle in the country I love, to have a life with my family, and still work on amazing shows from the other side of the world!

When I stumbled across VFX Legion on the interwebs, I had just watched a brutal short documentary called “Hollywood’s Greatest Trick” following up the ripples that went through the industry after Rhythm & Hue Studio’s collapse after winning the Oscar for their work on Life of Pi. I’ve been both an artist and managed a small postproduction company a few years ago, so I've seen how this industry can be both fulfilling and devastating. The very high costs of a large full-time staff, the infrastructure required, a central location – while nurturing and directing artists to produce better and more creative work is the Everest anyone running a VFX company needs to climb. But what I saw in VFX Legion was a company that minimized its overheads, investing its efforts and resources almost entirely on its artists. And my experience has showed that to be true. Although I have only been working with Legion part-time for the past few months, their process has stripped away all the distractions and disruptions to the task at hand, lubricated by great communication. I can sit down and tackle a shot without wasting hours commuting, waiting for resources or elements, and hoping to nail a vague brief. More than that, I’m excited to be working with senior artists eager to give advice or even help out in a bind. Although we may be thousands of miles apart, the collaboration is close. Of course, people may argue that working in the same office facilitates quick and effective communication – but I find it’s often like those who live near the beach: they hardly ever appreciate it, much less go out for a swim! The guys at VFX Legion don't take communication for granted - it’s the lifeblood of production. So they are deliberate, precise and quick in their communication. As my Shotgun Inbox fills with updates, I know I'm part of a fantastic team!

My career in postproduction has been full of variety – often learning on the job to solve the challenge in front of me. It has shoved me into pretty much every part of production, each with unique challenges and problems. It's made me a flexible artist and a robust problem-solver. I realize I have a lot of room for development and improvement, so while we’re still figuring out my niche, I am eager to develop as a compositor within the team.

What projects have been particularly proud to work on at VFX Legion, and why?

I’ve only been working with Legion for the past two and half months, so I’ve just jumped onto the tail-end of two projects: El Chapo, and the latest episode of Scandal. I've loved working on the shows which had some tough shots - and I'm sure future projects will certainly stretch me. El Chapo had some particularly challenging shots; one killer stabilization which you’ll hopefully not notice at all!

Have you ever faced any challenges as an artist?

I think one of the main challenges is finding an environment to flourish. Too often, uncertainty and savage competition puts the artist in a precarious position of sacrificing a normal life for the sake of keeping a job. I know of guys who uprooted their entire family for an 8-month stint at a company on the other side of the country. They were worked into the ground, and suddenly the company went bankrupt, leaving scores - sometimes hundreds - of artists high and dry. I think the whole industry needs to reconsider the role of VFX, which have become indispensable. A company shouldn't be sacrificed for a film, artists shouldn't be abused; demanding more for less will ultimately implode the industry. Is it possible to treat vendors (and the artists in them) fairly while maintaining healthy competition? Is it possible to create some kind of standard for a creative service? These are tough questions, but they have to be addressed. For artists, finding a company that is adapting to a fast-evolving world, and looks after its people is important. Most artists aren't looking to get rich - they just want to make pretty pictures and have a life! I'm sure that is possible in the right environment.

Is remote working important for today's VFX industry? Why?

It is the future of the industry! With the unveiling of services like Elara and other cloud-based solutions, there is no doubt remote working will soon play a crucial role in VFX over the next decade. If not sooner. I've seen large companies with massive, expensive infrastructure collapse within a few months - unable to sustain such high monthly expenses. Remote working is creating a framework for a company to avoid the traditional costs (a building, a network, large local storage, etc…) while making it easier for artists to work (cutting out the commute, artist time spent waiting on other artists, etc…) It’s a no-brainer! I love spending time with my family - and because they love the outdoors, it means I have to be outdoors! It helps to have an African view. I also love reading, so give a loaded Kindle or leave me in a good library and I’m happy. Who knows, perhaps I may end up writing something too… Thanks for reading, check back next month for another! In the meantime, why not look at something cool?