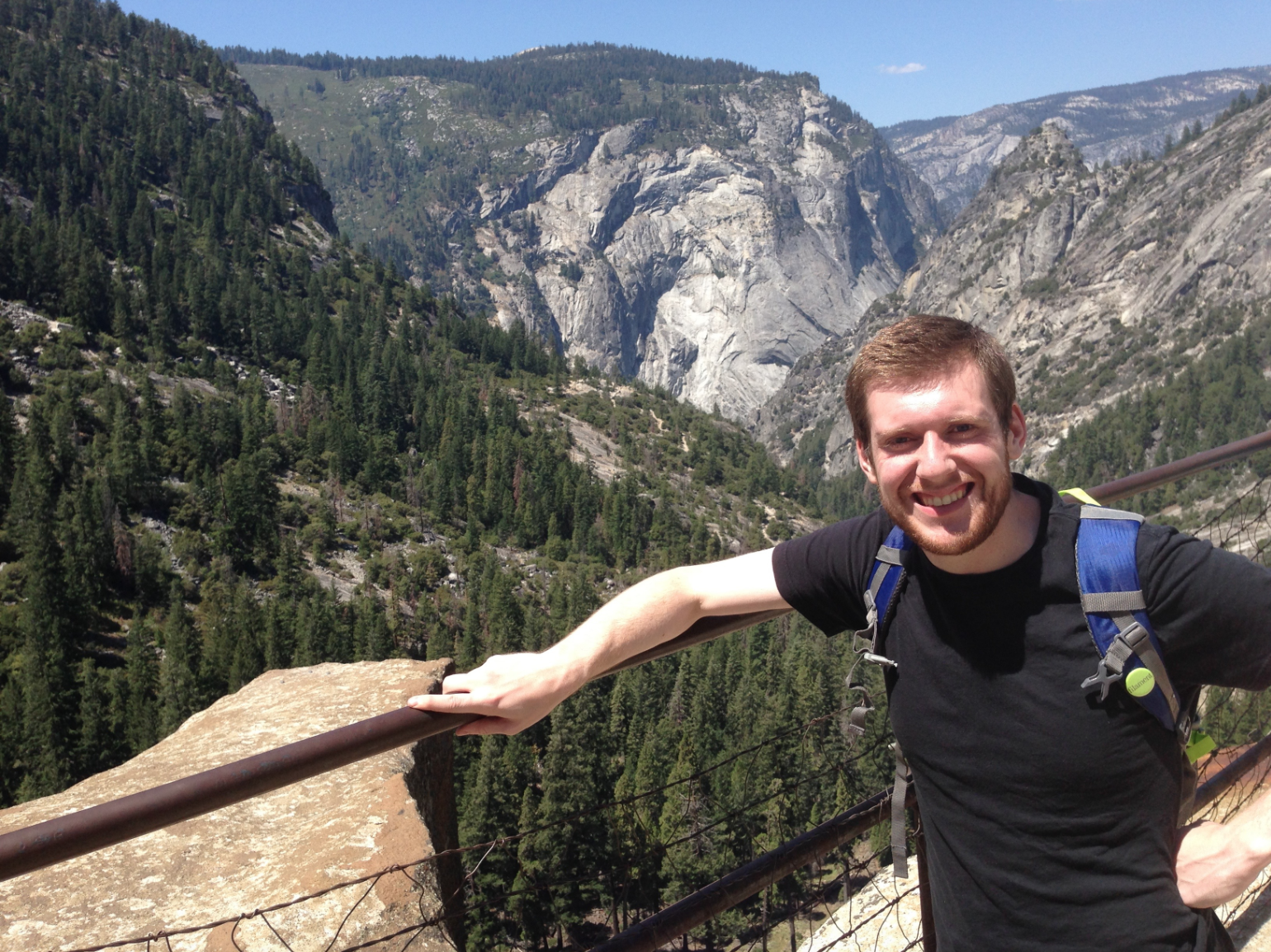 Self-confessed movie obsessive Alex Keller made the move from Chicago to LA to pursue his childhood dream of working in VFX. He talks to us about working at Legion, life in Burbank, California, and an ambitious hiking goal. Take it away, Alex.

I was born in Chicago and made the move out to Los Angeles about five years ago. I became really interested in VFX and CG from quite a young age. I had a general fascination with movies; I loved Star Wars, Toy Story and Lord of the Rings. I remember watching those movies when I was really young and knowing from that point that I wanted to do VFX and CG, and having that focus from such a young age has been nice. I got my start doing 2D animation first in documentaries and then for shows on Adult Swim, which was fun, but not really what I wanted to do. So, Legion came along and I was able to jump ship to CG which has been really rewarding.

What films and television really got you interested in the industry?

Definitely Star Wars. Return of the Jedi is my favourite, but I’d say Empire is probably the best. I was never a huge TV fan growing up, I feel it’s only recently started jumping to more complex CG stuff, which is great because now I get to work on it! I became a real movie buff in high school and started getting into a lot of older films. Now, I just watch everything I can get my hands on. I have a pretty ridiculous movie collection, I buy too many movies and never watch them again, so it might be a problem, but, hey, it looks cool.

The first big project I worked on, was actually one of the first things I did when I moved out to LA. I think I found the job on Craigslist and it was motion graphics and Photoshop work for this documentary on Dick Cheney for Showtime, that aired four or five years ago. The documentary actually ended up going to Sundance, which was pretty cool! After that I got an internship, which turned into a full-time job, working on a show called Mr Pickles on Adult Swim. It’s about a Lassie-type dog, who turns out to be a serial killer. It was pretty messed up and weird, but I worked on that for two series, mostly doing some 2D animation and clean-up. I also ended up doing a lot of odd jobs and one-off projects doing some flash animation. I finally got to do some CG animation for a show called The Greatest Party Story Ever for MTV, which was cool.

The thing I like about Legion is that it’s not just purely about animation, it’s also about general VFX, which is a big interest of mine. So, it’s been a great opportunity for me to just get in the trenches and learn everything I can, which is something I’ve always wanted to do. Not only am I still getting to do lots of animation work, but I’m also getting to do more realistic lighting and texture, and work with the Redshift engine and import dynamics, and generally get a good sense of how the entire pipeline works, which I think is just indispensable. So that’s been one of the biggest benefits for me.

The thing I’m appreciating most at the minute, is the quality of the characters at Legion. I work mostly out of the Burbank office, I live just a mile way, which is another huge benefit of working here. I could walk to work if I wanted, but I’m just way to lazy. It’s nice to wake up in the morning, drive for a couple of minutes down the road and be at work. I also like being available on the weekends, so I can just pop into the office if I need to.

My official title at Legion is 3D Artist, but if I had to talk about my specific skills, I’d say I’m an animator. I tend to work on any animation work that comes in. Right now, I’ve been working on a lot of vehicles – planes and cars – which is really fun. There’s actually a lot of complexity to it, there’s lots of moving parts and physics that you have to think about. You can’t just have a car go from A to B, it has to bounce and roll. It’s a challenge to figure out the logistics of it without compromising on the physics of it. My big passion though, is character animation and creature animation, we haven’t got too much of that at the moment but, hopefully that will happen one day.

What projects have been particularly challenging or exciting?

The toughest thing we’ve worked on so far was probably a project we worked on for CES over the Christmas break, mostly because it was such a tight deadline. We had to make an entire future city in about two weeks. It was a cool challenge to design this future city from scratch, I made a lot of pipes and billboards. I think one of the hardest parts was that we had to design a fleet of background cars, and car design is kind of difficult, it has a lot of nuance to it. To take that, and modify it in the digital space, was a real challenge. We’ve got to work on lots of exciting stuff, one of my favourites was the burnt down house in How to Get Away with Murder, I’d say it’s the project I’m most proud to have worked on so far. We had to show the house post-burnt down, so I took the house model and basically destroyed it. I removed the roof, added a bunch of pillars, put a lot of holes in it, and retextured it from top to bottom. By the end it really did look like a charred down house, and I’m really happy with how I made it look like a fairly convincing carcass of a house.

Have you ever faced any challenges as an artist?

Luckily, I’ve never had that kind of crisis of faith many artists have, mainly because I’ve been wanting to do this since I was five! It was difficult to move out to LA without any safety net, or even any contacts. I had to slowly work my way into the business, between jobs I’d have two or three months of unemployment, just doing nothing. I’d be working on my own stuff, but between seasons it’d be pretty tough.

Tell us about some of your other work?

Well, in the first gap of work I had when I moved out here, I had all this creative energy that needed to be put to use, so I made this little horror movie. It was okay, I don’t think it’s the worst thing in the world, but I am a pretty harsh critic of myself. I’d like to have a go at remaking it at some point. I tried submitting to a few festivals, but horror’s kind of niche and it costs quite a lot of money submit things, so I didn’t pursue it. I remember once during my time at Adult Swim there was a nine month gap between the first and second seasons. I ended up doing a couple of shows for FX – Axe Cop was one of them. It’s always hard in the industry not knowing what you’re going to be doing next. I’m really thankful that Legion has a constant stream of work coming in, and I feel like such a part of the team.

What are some of the benefits of working in the VFX Legion office?

The biggest benefit is being able to bounce ideas of the others in the office, and get direct feedback on the work you’re producing instantly. I always get frustrated waiting for notes via email, I feel like I’m sitting on my hands. Being able to just talk to someone and be able to clarify things easily is really beneficial for the way I work. Also, I focus better in an office environment, I remember on a couple of projects I had the option of working from home, but instead I lugged my iMac into the office just so I could work around people.

Which artists have inspired you?

George Lucas is a big inspiration, it’s nice to people are starting to appreciate him again, I’ve always thought he was a great creative inventor and just a general cool guy. Another big inspiration art-wise is Mike Mignola, I really like his really hard graphic design, using heavy shadows. Also, I’d say Hideaki Anno his work was a big turning point for me, I remember watching Neon Genesis Evangelion in high school and it blew my mind. I was kind of anti-anime at the time, but it opened my eyes that you can do so much in the medium.

What are your hobbies and passions outside of work?

My biggest hobby is movies, I watch as many as I can. I set myself a goal each year, which is to see at least 100 movies I haven’t seen before.  In addition to that, me and a friend host a podcast called Filmtastic Voyage, where we randomly generate a movie via IMBD and try and talk about it for as long as we can.  Usually we get sidetracked, but it’s a lot of fun. I also do a lot of hiking around LA. My favourite place is Wildwood Canyon in Burbank, which is basically in my backyard. It’s a very steep hike, but it’s great for exercise. I’ve been trying to work my way up to Inspiration Point in Pasadena. I keep getting halfway and then just think, “okay, I’ll go home now”, it’s a tough one. My big dream is to climb Half Dome in Yosemite, that’s my marathon goal, but I need to really get the training in for that!

Thanks for reading, check back soon for another! In the meantime, why not look at something cool?